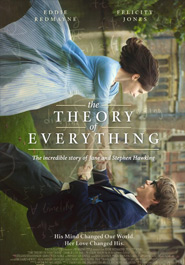 The Theory of Everything

The Theory of Everything

The Theory of Everything is the extraordinary and uplifting story of one of the world’s greatest living minds, the renowned astrophysicist Stephen Hawking, and of two people defying the steepest of odds through love. The film, based on the memoir Travelling to Infinity: My Life with Stephen, by Jane Hawking, is directed by Academy Award winner James Marsh (Man on Wire). In 1963, as a cosmology student at the storied U.K. university Cambridge, Stephen (portrayed by Eddie Redmayne of Les Misérables) is making great strides and is determined to find a “simple, eloquent explanation” for the universe. His own world opens up when he falls deeply in love with an arts major, fellow Cambridge student Jane Wilde (Felicity Jones of The Invisible Woman). But, at 21 years of age, this healthy, active young man receives an earth-shattering diagnosis: motor neuron disease will attack his limbs and his abilities, leaving him with limited speech and movement, and will take his life within two years.